Why send food to the food banks on blue pallets?

If you send your food surplus to the Food Banks on CHEP pallets...

Because we want you and our other customers to join us in the fight against food waste and hunger.
Because we believe that the food banks should not worry too much about logistical processes such as pallet exchange.

That is why the food bank networks Voedselbanken Nederland  and the Belgian Federation of Food Banks have set up a partnership in which CHEP facilitates the transportation of food to the Food Banks. Thanks to your shipments on CHEP pallets, you help both the food banks and the people who need them. 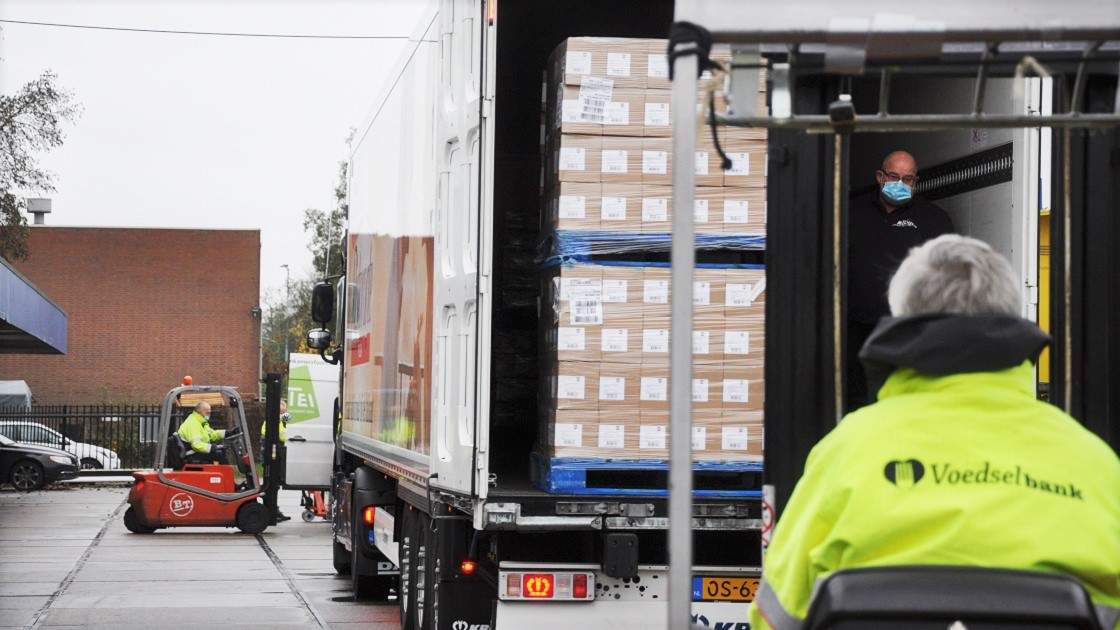 Dr. Oetker commits to fighting poverty and food waste and uses CHEP pallets to send surpluses to the food banks. This way both Dr. Oetker and the food banks can enjoy the advantages op pallet pooling for their business.

According to the European Parliament, every person throws about 345 kg of food away in Belgium, in The Netherlands even 540 kg. Around half of that waste is due to the actions of consumers, as well as industry, supermarkets and the catering and hospitality sector. Huge quantities of food are simply destroyed, and you can help reduce that figure by donating surplus food to food banks.

2) Contribute to the fight against poverty

Less than 5% of all surplus food reaches the Food Banks, which is a very small amount – especially when we consider that the Dutch Food Banks provide food to an average of 151 000 people a year, but that more than 1.2 million people live in poverty in the Netherlands. In Belgium, almost 170,000 people were helped in 2019, but the number of people at risk of poverty and social exclusion is set at 2.25 million (19.5%).

Moreover, COVID-19 has also led to a large increase in the number of people asking for food aid in 2020. During the first wave of this crisis, 15% more people called on the food banks in Belgium. In the Netherlands, too, the number of people increased by more than 8% in mid-year compared to the same period in 2019. So by donating production and food surpluses to the food banks, you are contributing to a healthy society and fighting hunger.

3)  You help to simplify the logistics processes of the food banks.

As the number of families in need of food aid has risen to a star due to the covid crisis, the food banks have their hands full. It is also getting more difficult to assemble volunteers. We believe that they shouldn't be preoccupied with their logistical processes, they should be as efficient and simple as possible. The food banks should not have to worry about exchanging pallets or getting rid of disposable ones. When their suppliers deliver on CHEP's pooling pallets, their pallet management becomes a lot easier and less time consuming.

4) You reduce your CO2 emissions

Food waste is the third largest polluter in the world. Not only the production of food is a major polluter, but also the destruction of (consumable) food surpluses cause CO2 emissions to rise sharply. Reduce your CO2 emissions by donating food surpluses to the food banks using the blue CHEP pallets. Because the pallets are shared and reused, they as well are much more sustainable than white exchange alternatives.

Want to send surplus food to the Food Banks? Get in touch

Subscribe to our newsletter for our newest articles and the latest news and stay informed about CHEP Benelux and the supply chain sector.

Get in touch with CHEP

Why send food to the food banks on blue pallets? | CHEP